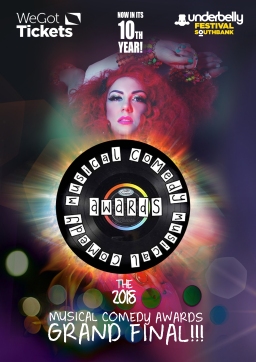 Can you believe it? We’ve been going for ten years! To celebrate this we are putting on a special show (all the details below!) on May 12th at the Udderbelly. If you book a ticket for the final via WeGotTickets (www.wegottickets.com/musicalcomedyawards) you will receive an email from WGT with a secret link to get cheaper tickets for our 10th anniversary show  (£12.50 instead of £17.50). Get in there!

Now in its tenth year, the WeGotTickets Musical Comedy Awards has provided a launch pad to superstar acts like Frisky and Mannish, Abandoman, Mae Martin, Rachel Parris and Jay Foreman and created a thriving independent platform to celebrate the artform that is musical comedy. As we celebrate 10 years of the WeGotTickets Musical Comedy Awards, join award-winning musical comedian Rachel Parris (The Mash Report, Austentatious), The Brett Domino Trio (29 million YouTube views) and a selection of the finest acts from the MCA for a celebration of music-based comedy! Hosted by MCA legend Nick Horseman. Sell out show 2009-18.

Full line up:
RACHEL PARRIS – ★★★★ “She has us hanging on her every word… One sometimes doubts that Britain’s got talent, but Parris has it in spades.” – Guardian
THE BRETT DOMINO TRIO – ‘This YouTubing Leeds duo perform wonderfully inventive covers of pop songs, largely using the world’s most underated instrument: the key-tar. Well worth catching.’ – TIME OUT
JENNY BEDE – ‘Absolutely set on a collision course with stardom.’ ***** (Mirror). ‘She’s a performer we’ll be seeing a lot more of.’ (Guardian). ‘Consistently hilarious; a unique delight.’ **** (ThreeWeeks). WeGotTickets MCA Best Newcomer 2014
FOUR FEMMES ON THE THAMES (PLUS HOMMES) – ‘They simply stole the show from the moment they strutted confidently on.’ – Bruce Dessau, Evening Standard
WeGotTickets MCA Winners 2016
JOLLYBOAT – ★★★★★ ‘It’s wonderful to see a comedy duo with such natural chemistry who clearly love to make each other laugh.’ — Broadway Baby
WeGotTickets MCA Winners 2011